While growing up in Parrsboro during the 1940’s and 1950’s, I often accompanied my father on trips to our “timberland” located five miles north of Port Greville. The trips were made to cut fire wood, logs, and long “timbers” that my father used in the Canning Family business that involved moving houses (Parker 2009,p.159). It was often necessary to spend several days in a small camp on the property. During the winter several miles of the narrow woods road to our property were unplowed and supplies were hauled to the camp on a special sled called a tobigan (pronounced toby-gun). The runners for the sled were as wide as skis and all parts of the sled were fastened together by wooden pins. My father said that tobigans were handmade and that most woodlot owners used them at onetime. He also thought that they were originally designed and made by the Mi’kmaq.

With the exception of a few surviving men and women who were involved in traditional lumber practices, the tobigan is all but forgotten. This is unfortunate since it had an elegant and artistic appearance; it was very functional with a clever design. A few pages are devoted to the tobigan in the publication Older Ways: Traditional Nova Scotia Craftsmen (Barss,1980).

On my behalf, Gerald Gloade, Program Development Officer for Mi’kmaq Museums and Cultural Centres, asked the Mi’kmaq Elders’ Advisory Committee if they thought that the tobigan was used by the Mi’kmaq prior to contact with Europeans. My question had the form:
English:

In an email Gerald Gloade reported:

“Our Elders feel that the word “Tobigan” is actually the Mi’kmaw word “Po’qikn”. “Po’qikn” meaning “Hole Maker” referring to the drilled and doweled side walls. The Elders said it is of Mi’kmaq origin and we had them before European contact. And that they were used for furs and supplies”.

1) The Mi’kmaw language is a verb based language. Very detailed in the descriptive meanings of form and function.

The photos show a tobigan being used in the 1930’s to haul camp supplies from Advocate to a lumber camp at Eatonville. This two-day over night trip into the camp took place every week because the seven-mile road from Advocate to Eatonville was not plowed during the winter. 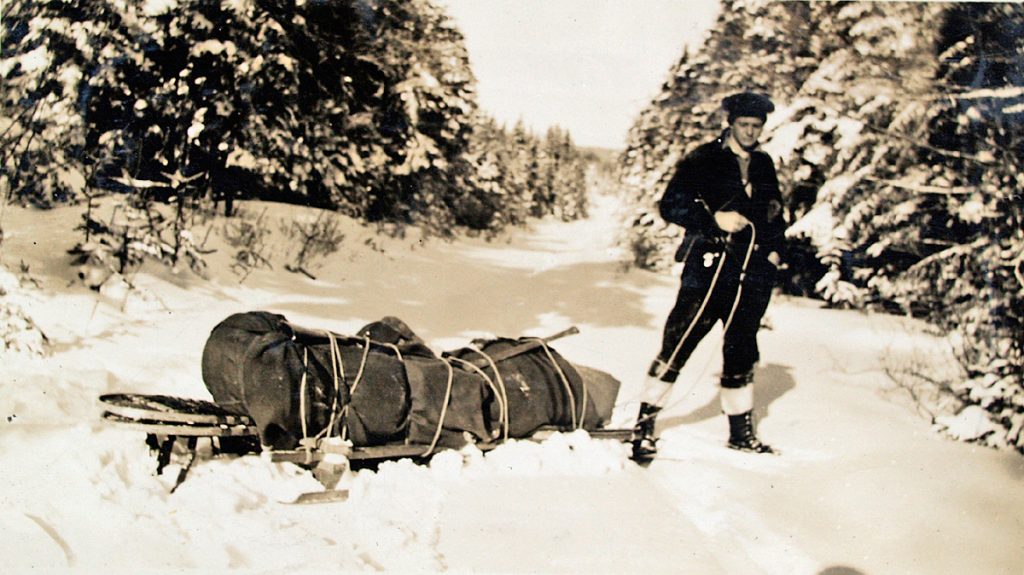