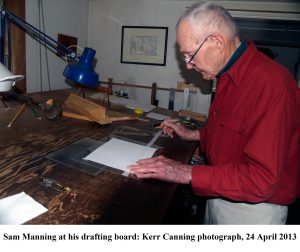 The following article was prepared for my friend Sam Manning. See

The Sawmill at the Wagstaff & Hatfield Shipyard in Port Greville, Nova Scotia, Canada

The Wagstaff & Hatfield shipyard-sawmill was one of several traditional, steam-driven sawmills still operating on the Parrsboro Shore during my youth. The economy of this region was timber-based since logs and lumber were used in sawmills and shipyards. This natural resource based economy had been in existence, in one form or another, since the first settlers arrived in the area.  However, the economic prosperity of this region was disappearing quickly when I was growing up in Parrsboro, Nova Scotia.

My family was involved in several diverse aspects of the timber economy.  I also participated by helping my father (1894 – 1979) during the summer months and on weekends during the winter.  From my memory of this work experience, I will focus on an important component in sawmills called the log carriage. This mechanical device had a direct bearing on father’s business.

In both the steam-driven and the water-powered sawmills, the saw was maintained in a fixed position and the log to be sawed was moved through the saw by placing it on a carriage that ran on tracks in steam-driven sawmills. Two basic requirements had to be met for this arrangement to function. The carriage had to be able to support the longest log that the mill might ever need to saw and the track, on which the carriage traveled, had to be more than twice the length of the longest log to be sawed. Logs for sawmills designed for producing market lumber were usually less than 25 feet in length (see Fig.1). This was not the case, however, for sawmills supplying shipyards. These mills had to be able to saw a log that was the full length of a tree (see Fig.2). 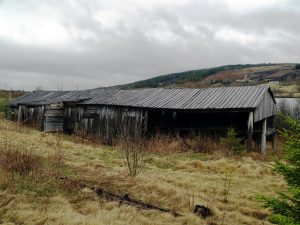 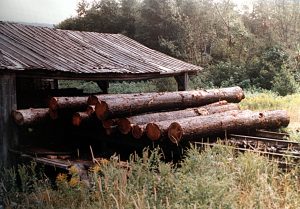 Fig.1: My logs ready to be sawed at the Hanna Family traditional sawmill located near Parrsboro, N.S. This mill was built in 1940 and the photograph was taken in the mid 1980’s. In the 1980’s, the owners ran the mill for only a few days each summer and they only sawed logs for their own use. 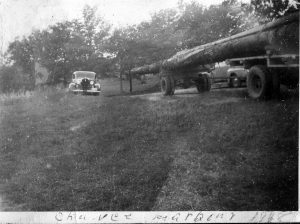 Fig.2: My father’s construction business involved moving houses. To do this, long timbers “squared” on two sides to form a flat top and bottom surface were placed under the building to be raised and then the building was moved. The timbers in Fig.2 have not been “squared”. 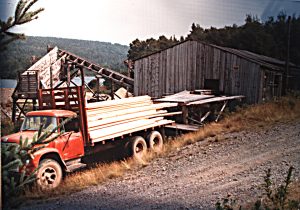 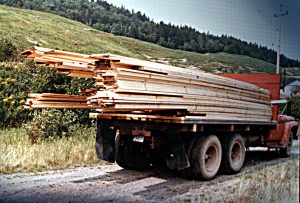 Figures 3, 4 and 5 show the carriage at the Hanna mill. Note that the carriage is long but not nearly as long as the logs on the truck in Fig.2. Furthermore, the track for the Hanna carriage does not run outside of the mill.  If you examine the Wagstaff & Hatfield shipyard-sawmill in Fig.6 you will be able to see that the logs were the complete length of a tree. To add this capacity to the mill, the carriage track was extended well beyond the end of the mill. Also, the carriage may have been longer than the Hanna carriage. As a teenager, I never thought to ask that question and, unfortunately, I did not photograph the Wagstaff & Hatfield shipyard-sawmill, which no longer exists.

The Wagstaff & Hatfield mill could easily, but not necessarily cheaply, “square” my father’s timbers. By sawing one slab off the opposite sides, this mill established a flat top surface and a flat bottom surface making the timber ready to be placed under a building.

When a new timber had to be made quickly, our tree-length logs were taken to the Wagstaff & Hatfield mill. When there was time, my father used a broadaxe to square the timbers by hand. Once again, I wish I had taken photographs of this procedure. Fortunately, a friend gave me two images (Figures 6B and 6C) taken in 1973 and James Robarts, a relative, was able to give me a photograph (Fig.7) of his grandfather and another man using a broadaxe. 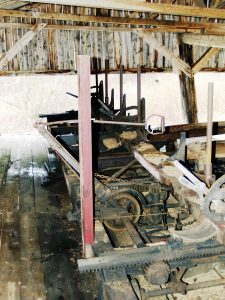 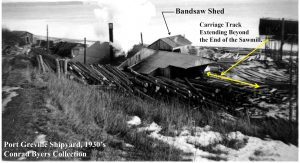 Fig.6: The Wagstaff & Hatfield steam driven shipyard sawmill in the 1930’s. Note that the track on which the carriage runs extends well beyond the end of the mill.

Fig.6B: The Wagstaff & Hatfield shipyard sawmill in 1973. Note that the track on which the carriage runs extends well beyond the end of the mill.

Fig.6C: The Wagstaff & Hatfield shipyard sawmill in 1973. Note that the track on which the carriage runs extends well beyond the end of the mill. 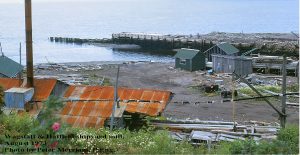 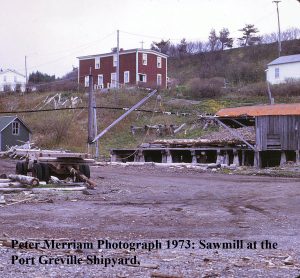 Fig.7: James Edward Morris with the pipe and another, unknown man at Advocate, Nova Scotia. The date is unknown and judging by the size of the stick (an alternate name for a timber) it is possible that the men have started the process of making a mast.

Fig. 8: My lumber from the logs at the Hanna mill in Fig.1. The truck will take this load to a field where it will be piled in a special way to air dry.

A Brief Introduction to one Aspect of my Father’s Business.

Sometime in the mid nineteenth century, an industrial-age screw jack was designed and manufactured for the purpose of lifting buildings. The buildings could then be moved using a pre-industrial age capstan (see Fig.9, 10 and 11). My family’s entry into the business of moving buildings began with my grandfather Canning (1856-1934) when he stopped going to sea and came ashore in Boston to work for a period of time for a company that specialized in this type of activity. The company was actually formed by former Nova Scotians who may have learned the trade in Boston. When my grandfather felt that he had learned enough to start his own business, he returned to Port Greville, Nova Scotia.

Fig.9: The pre-industrial age capstan. Iron stakes driven into the ground held the capstan in place and the cable was recycled from an abandoned copper mine located at Cape D’Or, near the village of Advocate, Nova Scotia. Fig.10 shows the house being pulled by the capstan.

Fig.10: The above building, known as the Captain Taylor House, has just come ashore after being moved by barge in 1935 from Port Greville on the north shore of the Minas Basin to Hantsport located on the south side of the Minas Basin. My father’s records contain the statement “Port Greville to Hantsport in 1935. If by road 136 miles, sailing time 3 ½ hours by water.”

The End of the Wagstaff & Hatfield Shipyard

The Wagstaff & Hatfield Shipyard closed in 1972 and four years later many of the major yard buildings were destroyed by the Groundhog Day Gale of 1976. The following photographs show the so called “Big Shed” where the vessels were built. The last photograph is a display of the destruction of this grand old building by a severe winter storm.

The Launch of a Minesweeper