This two part community comprised of a harbour and village is located on the Eatonville River which empties into the Chignecto Bay, west of Spicer’s Cove. The harbour is guarded by pillar rocks known as “The Three Sisters”. 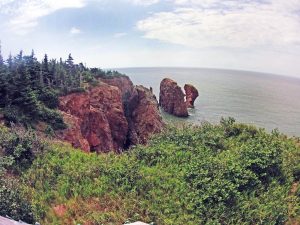 The Three Sisters (one partially hidden) on August 4, 2016

The name “Three Sisters” originates through the Glooscap Legends and through local stories. G.C. McKay in his article of Sept.26, 1987 in the Chronicle Herald gives the more romantic version:

At one time a man of the district had three daughters. These girls were vibrant, exuberant and fun-loving to such an extent that they finally exhausted the old man’s patience with their antics. In desperation he decided to teach them a lesson and in doing so he climbed up these three rock pillars leaving one daughter on top of each one to think over their actions. Ever since then the area has been known as the “Three Sisters”. 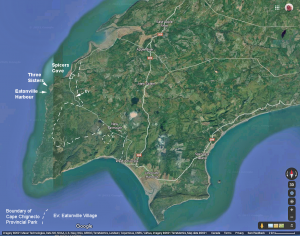 The name ‘ Eaton’ means homestead on a river. Whether or not the early grantees Henry A. Eaton in 1848 and D.R. & C.F. Eaton in 1870 actually lived on their lands, here their investments stood firm and the community was aptly named Eatonville.

The Eaton family originally settled in Cornwallis having come from the New England states became involved in shipbuilding and lumbering in several areas of Nova Scotia. In Eatonville they were well established. The Eaton’s erected a building to serve as a school and a church. The store in ‘Ole Town’ was very popular as people traveled from Advocate for the selection of goods and supplies. It was customary for lumbering companies to have a supply store where workers could equip themselves with clothing and personal items using a system of credit. At the end of each month the bookkeeper would tally up the employee’s debt to the store against his salary, and whatever was left after covering the debt, went to the employee. When one compared a salary of $1.00-$1.50 per day with the cost of goods which were relatively constant, one can see there wasn’t much left to go to the lumberman.

The Eaton family (D.R. & C.F. Eaton) and, others were in the shipbuilding and lumbering industries in Eatonville for over 30 years beginning in 1864. Near the ruins of the bridge that connected the sand spit to the mainland, the remains of the tramway are visible partly covered by alders as it had once followed along the riverbank. This tramway was used from 1893 at least to 1904. William Wasson, who was born in Eatonville in 1905, tells this story:

He did not see the tramway because it was gone before he was old enough to observe such things, but he heard about it from his mother. The tramway was a pole railway, and the trolleys with concave wheels were horse drawn over log tracks. The tramway moved lumber from the saw mill in ‘Ole Town’ to the shore for shipment and for use in shipbuilding.

These tramways of wood usually lasted at the most no more than 6 years. At Eatonville constant replacement of rotting and damaged logs must have taken place because the 1924 Map of the province of Nova Scotia clearly shows this tramway.

William Wasson remembers, “log drives” down Eatonville Brook from the mill ponds of ‘Ole Town’ after the sawmill had been moved to the shore. The mill site was near the small inlet still guarded by the Three Sisters and the sandbar.” Later a sluiceway was used at Eatonville to move logs and lumber, and it was operational in the 1940’s when scows transported lumber from Eatonville to Parrsboro for shipment to England.

To assist in the shipbuilding yard one required not only the convenience of a sawmill close by but often a blacksmith was a handy man too. At Eatonville, Robert Daniel was that man. He had his shop in full operation during the demanding time of shipbuilding. Daniel’s worked on two vessels built by James Kirkpatrick. (Loyalists & Planters)

There were over 20 ships built at Eatonville, one of these was the “Ella Moore” in 1851. This barque set a record in 1881 by sailing with a load of lumber from Eatonville to Belfast, Ireland and returning in two months to Eatonville.

The Eaton family was the primary shipbuilders in Eatonville. From the ship list one of the earliest registered was the “Chignecto”, a barque of 1032 tons built by D.R. & C.F. Eaton in 1874. One of the last ships built was by J.W. Kirkpatrick and owned by W.E. Wasson and others. This ship was a tern schooner of 462 tons called the “J.L. Ralston”. This ship was named for the Hon. J.L Ralston, Canada’s Minister of National Defense during much of W.W. 11. This schooner burned at Santa Domingo in April of 1921. Of the 16 vessels listed, 11 were built by the Eaton companies and were of notable size and variety being barques, schooners and ships.

Albert Fillmore, who assisted in surveying the lumbering operations in the Eatonville area in the mid 30’s, relates that the lands consisted of some 28000 acres. At one time there was a busy wharf, a mill, a few houses, a cookhouse, and living accommodations for the workers and barns for the horses. Since many vessels loaded lumber at Eatonville, two power boats were kept there to tow vessels in and out of the harbour and to rafts of lumber. He remembers the actual settlement being situated in ‘Ole Town’ up the river on the road which went from Spicer’s Cove to New Yarmouth.

Over the years, the property on the Cape including the area around ‘Ole Town’ exchanged hands many time leaving only a few small lots to private ownership. The sawmill having been operated by the Eaton’s for more than 30 years beginning in 1864 was sold to A.C. & C.W. Elderkin of Port Greville in 1897: then to J. Newton Pugsley of Parrsboro in 1907; then to James W. Kirkpatrick of Parrsboro in 1912, who sold it to Hunt and Draper of Maine in 1919. Finally being sold to American interests and this group having no immediate need of the facilities lead to the ceasing of activities in the 1920’s.

When the post offices at Apple River, Eatonville and New Yarmouth were removed this was pretty well the final blow.

With the shipyard and the lumbering industries in limbo many became employed in the gathering of spruce gum. They could receive up to 3 dollars a pound for the better quality which was found near the tops of trees. Even this enterprise did not last long and the community died out. By 1920 activity had ceased, the bottom fell out of the lumbering industry; steam power and railways were replacing sailing ships; and the post war era was taking its toll on the economy. And so again a once thriving community becomes a ghost town.
_____________________
*From materials given by Sylvia Fairbanks to Conrad Beyers for public use and passed on to Kerr Canning. This article was prepared as a preliminary history of Eatonville when the the provincial park was in the planning stage. Sylvia graciously agreed to our using it on parrsboroshoredays.ca; we will be adding some complementary photos, maps and links. – Kerr Canning & David Patriquin, May 3, 2021 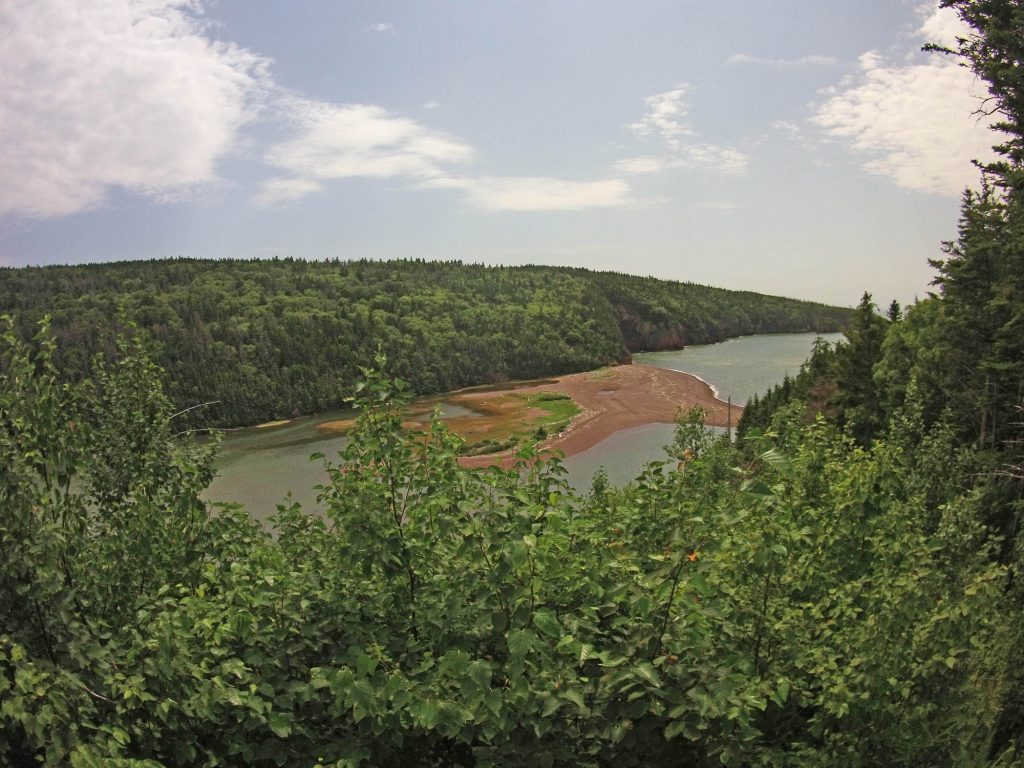 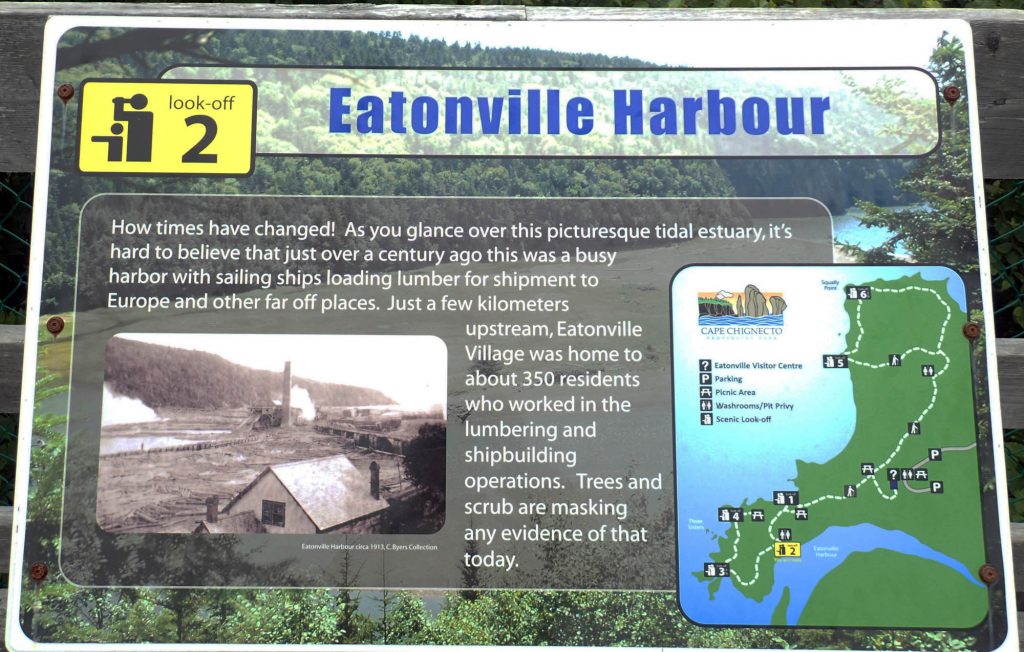 Present day
The Eatonville Road became a seasonal wilderness public road for off-road vehicles maintained by volunteers from Advocate to Eatonville and through to Spicers Cove. In 1989, the Eatonville site became part of Cape Chignecto Provincial Park. The old village site is crossed by the park’s main backpacking trail which follows the former tramway for several kilometres and connects to a bunkhouse and wilderness campsites at Eatonville’s “Old Town” site. The sea stacks and beach at the harbour are a popular kayak destination.

In July 2009, the Park built an “off-the-grid” seasonal interpretation centre accessible by car from Spicers Cove along with a network of short day hikes overlooking the harbour, the Three Sisters sea stacks and a dramatic Raised beach at nearby Squally Point. The interpretation centre closed due to environmental problems in 2013 but the trails and look-offs remain open.[11]

The tidal harbour at Eatonville floods very quickly at high tide and can trap hikers attempting to explore the sea stacks from the beach. Two hikers and a dog were trapped by the tide in 2014 and had to be rescued by a helicopter from CFB Greenwood.[12]