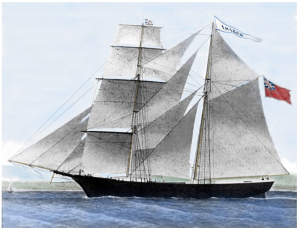 The Brigantine Amazon built in Spencer’s Island in 1861. In 1869 her name was changed to Mary Celeste.
Image courtesy of Conrad Byers

Introduction
Interest in establishing the Mary Celeste Interpretive Centre project developed as a result of informal discussions among a group of individuals in Spencer’s Island.

Initially, the group met to consider the feasibility of building a replica of the Mary Celeste, a 103 foot Brigantine built in Spencer’s Island and originally named, the Amazon.

When Laurie Currie, a member of the group, expressed a willingness to use his 10-acre field for the project, the focus expanded beyond the construction of a large vessel to encompass a wide range of activities on the site. The activities include buildings for active blacksmithing and small boat building as well as a structure to house the construction of a large vessel such as the Mary Celeste.

The group is well aware of the fact that building a vessel as large as the Mary Celeste will be a long-term process over many years. They are also well aware of the issues such as maintaining funding and momentum for a multi-year project.

The enthusiasm and the hopes of the group soared as well when Professor Roger Mullin of the Dalhousie School of Architecture and Planning expressed interest in having one of his design classes or one of his master’s students do the exploratory research and design work. 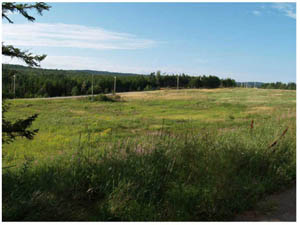 Fig 1. View to top of field. Click on images for larger versions and full captions. 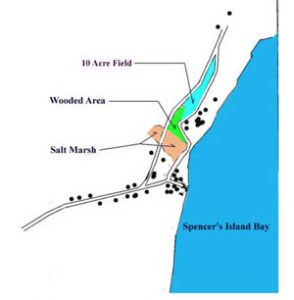 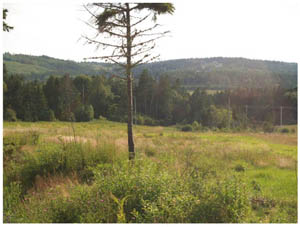 Fig. 3 Downhill to the road 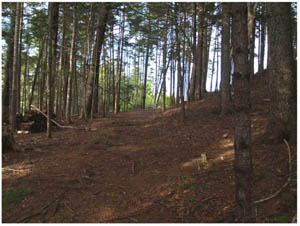 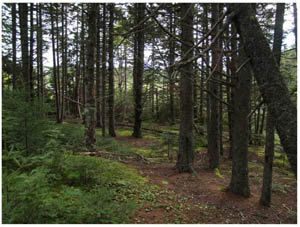 Fig. 5. The saltmarsh can be seen through the trees

The ten-acre triangular shaped field (see Fig.1, Fig.2, and Fig.3) is located in close proximity to the Spencer’s Island beach and gently slopes down hill to an old road that passes through a small wooded area. That road leads to the Spencer’s Island salt marsh. Fig.4 shows the old road and the salt marsh can be seen through the woods in Fig.5. The presence of this shaded roadway and salt marsh offers the possibility of adding a walking trail to the site. The site also includes a spacious level area at the top of the hill. If two story buildings were to be built in this area it should be possible to view Spencer’s Island Bay from the second story windows.

Laurie Currie is interested in having one or more rental houses and an art gallery on the site. These could provide a source of income for the Centre as well as providing accommodations for guests, artists, boat builders, blacksmiths, etc. Furthermore, the “The Mary Celeste Interpretive Centre” should provide for an electronic research facility where wireless internet access could be offered for the public and for the research community. This facility might be a separate building or part of the building that houses the art gallery.

Not only are most locations on the ten acre field suitable building sites they are also visible from the main highway from Parrsboro to Advocate. This highway runs along one side of the field and it is the route that tourists must use when they explore the Parrsboro Shore and then move on to Cape Chignecto Park, Apple River and Joggins.

Salt marshes are productive ecosystems that form nurseries for coastal food chains as well as habitats for fish, insects and birds. Interpretive signs that describe the salt marsh ecosystem could be placed along the walking trail. This would add to the appeal of the site by attracting naturalists and other visitors interested in the ecology of the region. Possible resource people are:

Suggestions for the background research that should be done by a design class or by a graduate student.

Developing a concept and a site plan for the centre as well as designing each structure in the centre should provide sufficient material for a design class or a Master of Architecture level thesis. Initially, research is needed in order to gain an overview and an understanding of the influence of the following topics.

1) Traditional boat building activities of the Parsboro Shore, including hand tools and their uses, the role of the half model as a design tool, lofting and its role in the building process.

3) Marine blacksmithing activities and the buildings in which these activities took place.

4) Traditional shipyards: their buildings, tools and their use, and the role of the half model and lofting in the design process. Large vessels were built in shipyards and their physical size limited the amount of lofting that could be done.

5) The role of the tides and geological land forms such as barrier beaches and tidal lagoons in choosing shipbuilding locations.

While conducting this research, the geographical location of the proposed “Mary Celeste Interpretive Centre” on the Upper Bay of Fundy must be considered. The centre should reflect the Bay of Fundy region in general and the Parrsboro Shore/Apple River areas in particular since the buildings themselves, shipbuilding methods and especially the small craft and large vessel designs vary significantly from one area to another along the Atlantic Coast. This fact is described in the following quote from a published masters thesis by David Alan Taylor[1]

…a boat should be judged only, and I repeat only, in the light of the requirements for which she was built and the resources of the society which built her. She should never be judged by comparison with other boats built for different purposes of different materials in different circumstances. To appreciate a boat, one must be aware of the factors that gave rise to her building, the timber available, the general environment, the building traditions of the society which produced her, and above all, the purpose for which she was built.
Basil A Greenhill, Archaeology of the Boat: A new Introductory Study , Middletown . Conn.Wesleyan University Press. 1976

Before the 1992 moratorium on the commercial cod fishery,  Newfoundland had coastal settlements that still used small locally-built wooden boats for the inshore fishery. This practice of fishing from small craft, built by traditional methods and from traditional materials, came to an end when the collapse of the cod stocks eliminated the need for wooden boats.

Fortunately Dr. Taylor was a graduate student in the late 1970’s at Memorial University and for his thesis topic he chose the documentation of the wooden boat building tradition in the small community of Winterton located on the coast of Newfoundland’s Trinity Bay.

It is also fortunate that the Canadian Museum of Civilization chose to publish the findings of Dr. Taylor’s in-depth study. Commonalities exist between Winterton and the traditional wooden boat building communities that once flourished along the Parrsboro Shore. This makes Boat Building in Winterton a useful reference for investigating the construction of small craft on the Parrsboro Shore.