Like Kerr, I  grew up in the 1940s and 50s, but in Quebec. My folks were from the Annapolis Valley in Nova Scotia and we made family visits there and to the south shore every couple years after my mom and dad purchased our first car, in 1950. 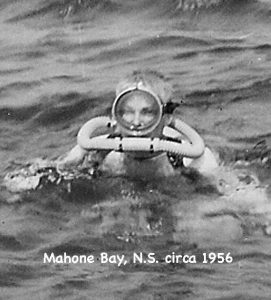 Inspired by Jacques Cousteau and Silent World, circa 1955 I ordered an aqua lung and a book about how to use it from a catalog.   My dad would row out from the shore of Rous Island in Mahone Bay (where my uncle had a cottage) and wait for me while I picked up scallops and lobsters or just explored below. I wore heavy long underwear as a wetsuit. Such now-but-not-then illegal activities had a lot to do with my eventually doing graduate studies in marine biology at McGill and subsequently getting a position in Biology at Dalhousie University in 1973; it was my dream job in my dream place and I have lived in Nova Scotia ever since. Meanwhile, Kerr was going the other direction, from Nova Scotia to Quebec.

In 1998 I started to investigate the use of “the web” as a tool for teaching and learning and applying it in my classes, primarily as a tool to communicate outside of the classroom and to facilitate collaboration between students on class projects. Kerr, at  John Abbott College in Ste. Anne de Bellevue, Quebec, was developing similar interests and in the early 2000s invited me to give a talk at John Abbott. Needless to say we quickly discovered other mutual interests.  Kerr was  beginning to investigate occurrence of industrial artifacts associated with salt marshes on the Parrsboro shore and as I had studied salt marshes in my early days at Dal, he invited me to spend some time with him exploring salt mashes on the Parrsboro shore. My first visit was in 2006. There have been repeats most years since. (I retired from Dal in 2008.)  In the year of Covid, we began more frequent virtual interaction via Zoom and the like and hatched this website.

None of this would have happened, of course, without a lot of help and encouragement – and tolerance – from our spouses (Darlene x Kerr, Nina x myself). In the process we have all become good friends.

When I am on the Parrsboro shore and look across the Minas Basin, I often think about my Dad who was born on the dykelands of the Grand Pre (Wolfville) area and wish I could ask him if he ever went across the bay to Parrsboro, and to tell me about the boat he travelled on and what he did when he got there… but I can’t. My Mom as a child spent many summer days with her family in Port Lorne, also across the Minas Basin from Parrsboro, and I can’t ask her either. It’s one of the reasons I am helping Kerr to share so many of his memories, and his quest to understand and document “how things worked” in days gone by.