A History of Tidal Energy
On Blog for Canadian History Workshop

Age of Sail Museum and Archives
“The Greville Bay Shipbuilding Museum Society’s mission is to inspire an understanding and appreciation of the lumbering and seafaring history through interactive displays and discussion while fostering connections and relationships. Overlooking the tidal Greville River, the center pays tribute to the heritage of the communities along the Minas Channel. Through pictures, videos, story telling, models, artifacts and hands-on exhibits, the museum brings to life the history of shipbuilding, lumbering and local community lives. The area boosts a rich history from the time of the dinosaurs to the Mi’kmaq and Acadians to loyalists and shipbuilders to the present day. The heritage center hosts a museum in an 1854 church, local blacksmith shop from the Wagstaff and Hatfield shipyard, as well as the Port Greville Lighthouse circa 1908 and a boathouse. A vast collection of genealogical and research material is available to the general public for their benefit. Definitely a “must see” stop while in the region.”

Fundy Shore Ecotour
Book/website archived on web.archive.org. It was produced by the Central Nova Scotia Tourist Association, circa 2005. A home page for this association is posted at http://www.centralnovascotia.com/ with the label “This website is closed”.    From the Overview for the Fundy Shore Ecotour

See the fossils, tide rips and migrant birds on Nova Scotia’s Fundy Shore … and watch for the ghosts of brigantines and schooners…

The Nova Scotia Adventurer’s Companion for the Fundy Shore EcoTour is a publication created to help you strike out on your own, at your own pace. The Companion includes a detailed tour map, with directions to special places, background reading on the character and flavour of the area, and space for your own field notes and observations. You’ll head home with a complete record of your adventure in one handy permanent volume.

THE ATLANTIC AS A SOCIOLOGICAL AND POLITICAL ORGANISM
Amanda Pelham – June 9, 2011 on www.dal.ca

SPENCER’S ISLAND IS NOT A GHOST TOWN: A CULTURAL INSTITUTION IN A POST-INDUSTRIAL COMMUNITY
Paul Zylstra 2009 Thesis for Master of Architecture at Dalhousie University, Halifax, Nova Scotia

The Basin of Minas and its early settlers
WC Milner, 193x? 132 pages McGill University Library. On archive.org Link is to a PDF 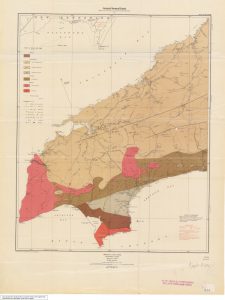 E.R. Faribault (1855-1934), was a geologist with the Geological Survey of Canada (GSC) from 1882 until 1932. His life’s work was the systematic geological mapping of Nova Scotia. This series forms part of the map collection and consists of maps, produced by his teamwork with Hugh Fletcher. It was the GSC’s most ambitious project to that point and continued until Faribault’s retirement in 1933. These maps are amazingly detailed and accurate considering the time at which they were created, the equipment available and the lack of subsurface information. These maps continue to stand as examples of excellence in field geology and are still referred to by modern geologists.

Use this search page to access the maps: https://geoscan.nrcan.gc.ca/starweb/geoscan/servlet.starweb?path=geoscan/geoscan_e.web
Enter “Faribault-Fletcher” in the search box. Select desired maps.