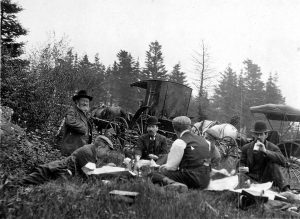 This page comments on use of Geological Survey of Canada Maps published during the early years of the GSC Surveys to identify sites of potential archeological interest.*

Historical maps of Nova Scotia prepared by the Geological Survey of Canada and published between 1884 and 1921 provide, in addition to information on mineral resources, such details as the locations of shipyards, sawmills, grindstone quarries, dams, dykes, fresh water meadows, lumber camps, piers, schools, graveyards, and villages no longer in existence.

These maps have a precision and accuracy considered to be of high quality, even by today’s standards.

The GSC photograph collection, dating at least from the 1870’s, contains images that provide information on people and on physical structures that have long disappeared.
______________
*Material on this page was prepared initially for an article in the Newsletter of the Nova Scotia Archaeology Society; it was published in Volume 18, No. 1, Fall 2005

When the annual reports depict the geology of an area, these geological formations are often located in or near a community. Sometimes when this happens, useful information about the community is included with the geological descriptions. Dams, wharves, dykes and other man made structures are mentioned and sometimes described. Comments about the early lumbering and agriculture activities may be included. There may be a short statement documenting the types of timber that are still plentiful and the species, such as pine, that have all but disappeared. Agricultural comments may discuss hay production on large fresh water meadows or mention may be made that French dykes have been replaced by dykes that “cross the brooks at their mouths instead of turning up along them”. [1] There may even be a recommendation stating that adding marsh mud could easily reclaim barren land near the shore.[1]

The Geological Survey of Canada, founded before Confederation and re-enacted after Confederation by the Canadian Parliament, was given the mandate to systematically gather and record geological information in the various regions of Canada. [2]

During the summer and autumn months of each year, data were collected by regional field officers and their assistants. As winter approached the geologists returned to the Geological Survey headquarters, located first in Montreal near the campus of McGill University and relocated to Ottawa in 1881. The field data, recorded in journals now held at the Library and Archives Canada, was used for constructing drawings and multicoloured areal maps, and for writing annual reports. Although written primarily for geologists and the mining industry the annual reports and the multicoloured maps may be used as sources of information for disciplines such as geography, history and archeology; the material published in the early years of the Survey is of particular interest to historians and to archeologists.

The Survey field workers also collected rock samples as well as information on and specimens of plants, animals, and fish. Artifacts and material dealing with human history were also gathered. All of this was placed in the Survey’s museum. The Geological Survey of Canada Museum eventually became the National Museum of Canada. [3] 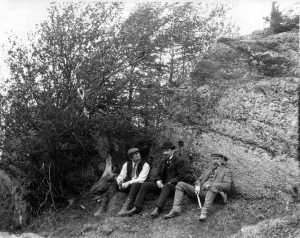 In the early years of the Survey, Nova Scotia was effectively divided into two regions defined by coal and gold. The geologists in charge, E. R. Faribault and Hugh Fletcher [4,5] had specific interests. Gold-bearing rocks fascinated E. R. Faribault and Hugh Fletcher was interested in coal as well as iron. Other names, such as Scott Barlow, Robert Chalmers, and R. W. Ells, appear in the early Survey records, but the published work of the field officers E. R. Faribault and Hugh Fletcher form the largest collection. Both men devoted their entire careers to the study of Nova Scotia geology and the detailed areal maps they published can be obtained as separate entities not attached to the annual reports. These maps, as well as those produced by several other geologists, are now available on the Internet! The Geological Survey of Canada annual reports are housed in various Canadian university and government libraries.

More than seventy, one mile to the inch, multicoloured sheets, known as the Faribault-Fletcher Geological Maps were published between 1884 and 1921 and approximately sixty two Gold District Maps were published during the 50 year career of E. R. Faribault. At the time this collection of map sheets was considered the Survey’s most ambitious project. [5] Each map in the Faribault-Fletcher collection is given a name and a number, Southampton Sheet No. 82 for example. In order to access a Geological Map or a Gold District Map on the Internet one must obtain the name of the sheet. EDIT EDIT Appendix One describes the procedure for obtaining the name and number assigned to each multicoloured map sheet and Appendix Two outlines the steps for downloading maps from the Internet.

The roads, streams, and shorelines drawn on a map sheet provide the graphical framework for displaying geological information. For a map to be useful to a geologist or to the mining industry, these three components must be measured and drawn accurately. Faribault and Fletcher were able to achieve a precision and accuracy that is considered good even by today’s standards. While making their measurements and drawing their maps these two pioneering scientists chose to record not only geological material but also information that would be useful to historians and archeologists. Along the roads, the streams, and the shorelines Faribault and Fletcher encountered shipyards, sawmills, grindstone quarries, dams, dykes, fresh water meadows, lumber camps, piers, schools, graveyards, and villages that do not exist today. On the Faribault-Fletcher Geological Maps the locations of many of these man made objects are clearly marked alongside the data on rocks and mineral resources.

2. Morris Zaslow , Reading the Rocks: The Story of the Geological Survey of Canada 1842‑1972, the Macmillan Company of Canada, Ottawa, 1975, Chapter 1. This 600 page book, written by a University of Western Ontario history professor, is an excellent source of information on the Geological Survey of Canada. At the end of this very detailed book, the author provides an excellent and useful “Essay on Sources”